6 ways of defending AI from humans

The two largest sellers of advertisers in the history of the world do not need to be convinced of the utility of machine learning. In 2018, a recruiting firm reported “80 percent of machine learning engineers with PhDs are scooped up by Google and Facebook.”

The integrity of AI systems is essential for companies who make tens of billions of dollars delivering ad impressions. And it is even more vital as adversarial attacks could be used to destroy reputations, influence global politics, and possibly even take down drones.

The problem with securing AI models

“Security Issues, Dangers and Implications of Smart Information Systems”, a new study published by the SHERPA consortium – an EU-funded project F-Secure joined in 2018 – explains why it’s so hard to secure AI models.

“Adversarial attacks against machine learning models are hard to defend against because there are very many ways for attackers to force models into producing incorrect outputs,” Section 4 on “Mitigations against adversarial attacks” explains. This helps explain why most models “in the wild” today are being trained “without regard to possible adversarial inputs.”

Models work as expected with expected inputs. Unfortunately, the number of unexpected inputs is… unexpected. And as the complexity of models increases, preparing models to withstand attacks becomes more and more difficult.

This task can be even more complex than the never-ending chore of identifying vulnerabilities in software because it “involves identifying inputs that cause the model to produce incorrect verdicts, such as false positives, false negatives, or incorrect policy decisions, and identifying whether confidential data can be extracted from the model.”

The report identifies 6 methods of mitigating against AI attacks.

This method suggests anticipating attacks in the form of adversarial samples and including them in the model’s data set to reject.

“Unfortunately, there are plenty of other adversarial samples that can be created that still fool a model created in this way, and hence adversarial training itself only provides resilience against the simplest of attack methods,” the report notes.

Adversarial training resembles data augmentation, which is used, for instance, to improve AI photo recognition or image classifier models. “[B]y flipping, cropping, and adjusting the brightness of each input sample, and adding these to the training set” the model improves.

Attackers looking to get a sense of how a model’s makes decisions may try multiple inputs in an attempt to get a sense of a gradient in the results. This helps them see how the model works so they can replicate it and practice adversarial attacks against it. 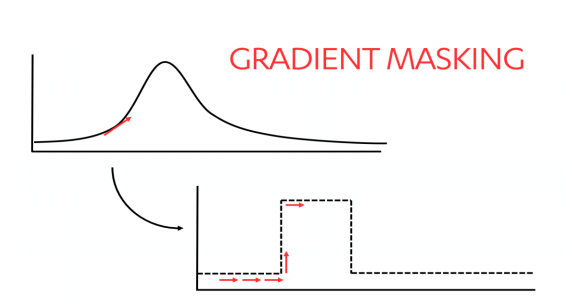 Protect your model by detecting and cleaning adversarial inputs

One way to protect your model is to put safeguards between it and the public. Detection and cleaning can remove attackers’ tricks and deliver raw data directly to the model.

One method of doing this requires the training a series of models against separate, unique portions of training data. Data is then fed into each model with a small amount of random noise. “The resulting values become ‘votes’, the highest of which becomes the output.”

Multiple ways of encrypting data have been developed over the past five decades to provide owners a way of securing their data while gaining more utility from it, which can be used alone or in tandem to protect data privacy.

However, these techniques are only useful on a limited number of machine learning algorithms and can require a burdensome amount of computing power.

The human mind is the antidote to poisoning attacks

Web services have been dealing with poisoning attacks throughout this century, developing defenses required to preserve the reputation of their services.

But the most effective method of detecting AI abuse does not yet come from a machine—human intervention is required to create rules and directly moderate content.

Human beings bring human biases, which are more complicated than any model.

“However, as long as attackers are human, it will take other humans to think as creatively as the attackers in order to defend their systems from attack,” the report notes. “This fact will not change in the near future.