Phishing with malicious attachments has been the main delivery method that attackers use to compromise user endpoints for several years. All it takes is just one victim to fall for a phishing attack and the possibility of the attackers gaining a foothold inside the victim’s network rises significantly.

Considering the successful rate of phishing attacks, there are a variety of different types of attachments usually used to deliver a malicious payload, such as executable files, office documents embedded with macros, or programs written in Java or JavaScript.In this post, we are going to focus on office documents with embedded macros. Often, an efficient first step is to use a dynamic analysis sandbox to study the behavior of the malware. However, static analysis is also a useful technique and this post will demonstrate the use of “olevba” for static analysis, a script to parse OLE and OpenXML files that was created by Decalage.

For this post, we are going to use a sample that was delivered through phishing that is related to the Emotet malware.

Analyzing the streams of the OLE file

Running the olevba tool allows you to extract all VBA macros found in the streams of the OLE container: 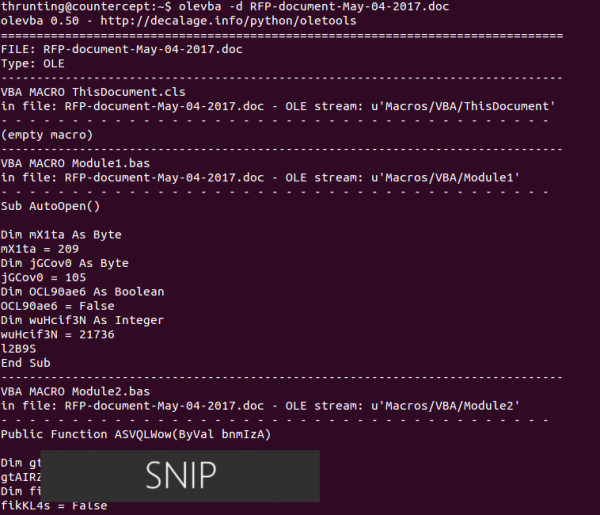 Malicious macros are usually obfuscated to make signature detection more difficult and generally make analysis more time consuming. Often, a key objective is to quickly discover if there is a remote command and control channel that the macro will connect to and/or a command that the macro will execute.

We will start by analyzing the first stream:

The AutoOpen() function is a built-in macro function that runs when the document is opened. From analysis of the code, it is clear that some of the code is unnecessary but that it concludes by calling the “l2B9S” function at the end of the subroutine.

The function l2B9S can be found in Module3, which also contains more unnecessary code due to obfuscation techniques and is intended to frustrate analysis. However, further analysis of the code in Module3 reveals a call to another function named “EUwBq”.

The “EuwBG” function can be traced back to Module4 and contains some more interesting functionality than we have not seen until now:

Apart from the noise (unnecessary code), there are references to base64 and additionally a base64 encoded string, which may contain interesting data. This is concatenated with some other variables to form a larger string.

Tracing the variables, we then find later that this is then concatenated into an even larger string with a number of other variables, as shown below:

Tracing it further brings us back to Module3, which calls a Shell function that is used to execute a command on the system: 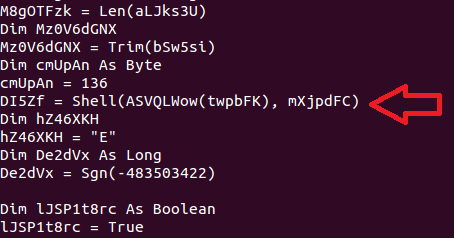 This certainly looks highly suspicious and is likely the end goal of the macro payload. Generally, base64 encoded strings along with a combination of string concatenation is used as an obfuscation technique to hide what commands are being executed by the macro.

With further analysis, we can summarize the following key components of the payload:

AutoOpen()  is used to load the payload on document open, which is calling the 12B9S function.

12B9S() is the main function using the Shell function to execute a system command and that calls functions from other modules.

twpbFK is the payload that is essentially split up into multiple base64 encoded chunks.

ASVQLWow is the decode function. 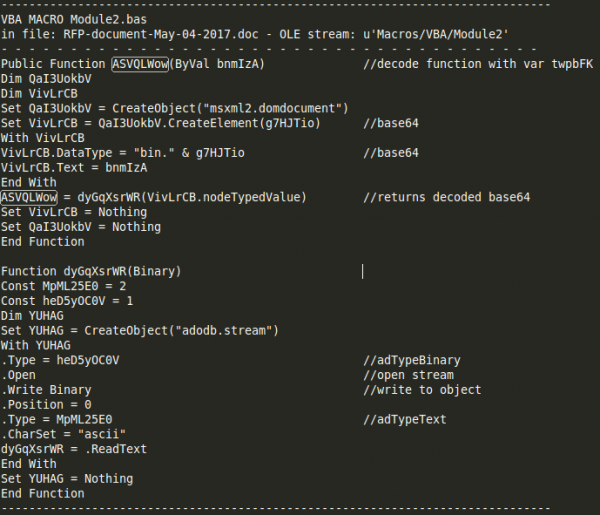 After the base64 encoded payload is pieced together and then decoded, it results in the following command being executed:

Breaking the PowerShell command down, we can see that the following key steps are performed:

As we can see, this macro is simply acting as a stager to remotely fetch some malicious executables from some external domains, save them to disk and then execute them.

At the time of analysis, the following behavior was observed for the domains involved:

The two files that were successfully downloaded were found to have the same hash. In this case, this was likely done to provide some redundancy against individual C2 channels being blocked as malicious.