What an in-memory attack is?

An in-memory attack does not rely on a file written to disk. It lives in a computer’s RAM, which we call ‘volatile memory’. This means the malicious content is removed once the computer is rebooted.

The reason why attackers are trying to avoid files being written to disk is that most widely-used security software programs (such as anti-virus) concentrate their efforts on inspecting artefacts written to disk. As a result, these tools are proficient at detecting malicious files and preventing them from infecting a computer. By contrast, in-memory attacks are more sophisticated and bypass anti-virus software and forensics. For an attacker wanting to remain undetected, it’s currently the best way to evade defences.

There’s a lot of jargon around in-memory attacks, so let’s break some of that down:

To carry out a simple in-memory attack one only needs to use the three functions shown above, which will be looked at alongside a few other types of exploit:

Shellcode is a small piece of code that – when used as a payload – injects malicious code into a running application. In this case, it is used to launch PowerShell, which is regularly used in attempts to execute in-memory attacks. 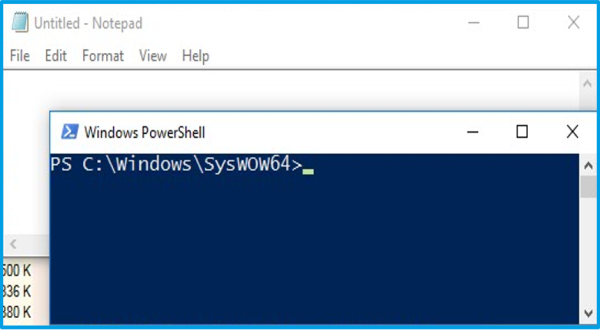 Although the PowerShell command here is benign, it could also have been appended with malicious arguments to try and launch an exploit on the target system.

Normally, loading a DLL in Windows calls the function LoadLibrary. It takes the path of the file and executes its functions without requiring too much from the user. It requires the DLL to be on disk and will enumerate the DLL with the process.

However, there is a stealthier method called reflective DLL injection, in which the contents of a DLL can be loaded in memory. This requires the usage of a custom loader, as LoadLibrary cannot be used. So, when the contents of the DLL is loaded into memory, the execution will pass to the embedded code (bootstrapper code), which will emulate the tasks carried out by LoadLibrary (such as mapping the variable memory) and execute the reflectively loaded functions, as seen below. 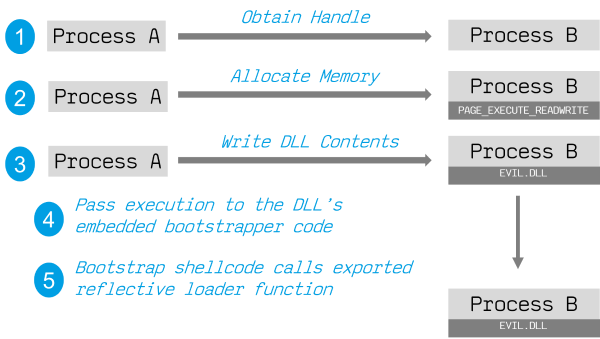 DoublePulsar – which was used alongside EternalBlue in the WannaCry attacks – performed a reflective DLL injection, but did not make use of the standard LoadLibrary call. You can find out more about it in our in-depth analysis of its use.

This technique starts a legitimate process whose sole purpose is to be a container for malicious code. It delivers the process in a “suspended” state, then rewrites the content with the required code in memory, and continues to execution.

Dridex – the infamous banking malware – and many of its variants use process hollowing to gain initial footholds on machines. Using Dridex as an example for process hollowing, this type of malware typically follows this sequence:

–        A phishing email with an embedded macro is opened (demonstrating yet again that people are inadvertently the weakest link in an organization);

–        Process hollowing extracts the unpacked version of the exploit into memory, which will then run;

–        The malware now has a foothold and will snoop on users, waiting for credentials to be entered. It can also upload files, execute files, and inject itself into browser processes to monitor information.

Attackers, as we know, never sit on their laurels. They regularly change techniques to evade detection. As process hollowing has become more associated with Dridex, its authors have looked for new ways to execute its malware – developing a technique called AtomBombing.

AtomBombing is an exploit where attackers write malicious code into Windows’ atom tables, then force a legitimate program to retrieve the code from the table. For Dridex, this meant: a malicious buffer was written into an atom table; asynchronous procedure call (APC) was used to schedule the target process to retrieve the buffer and place it into read-write memory; a return-oriented programming (ROP) chain copied the buffer into RWX memory, where it then executed.

Inline hooking is just what it sounds like – modifying memory ‘inline’ to ‘hook’ functions and redirect execution. It often involves modifying the first few instructions to move execution flow to the malicious code, which will then re-route to the legitimate call.

The Zeus malware – which has had a prolific career due to its stealth techniques – infects via phishing and then hooks functions related to http communications and uses man-in-the-browser keystroke logging to steal passwords and get access to accounts.

Memory analysis is a crucial component of any attack detection solution, as the signature-based nature of traditional detection would not detect the techniques I’ve described. In-memory hunting allows us to look in more detail at processes and gauge whether they’ve been tampered with.

Looking at isolated processes is very different to looking at scale, and there is still work to be done in this field. We need to develop indicators that associates and identifies some of the behavior we see during in-memory attacks. However, the results will still require the discretion and experience of a skilled analyst to understand what has happened, and decide what to do next.