Over the past month, I’ve pointed Twitter analytics scripts at a set of search terms relevant to the German elections in order to study trends and look for interference.

Germans aren’t all that into Twitter. During European waking hours Tweets in German make up less than 0.5% of all Tweets published. 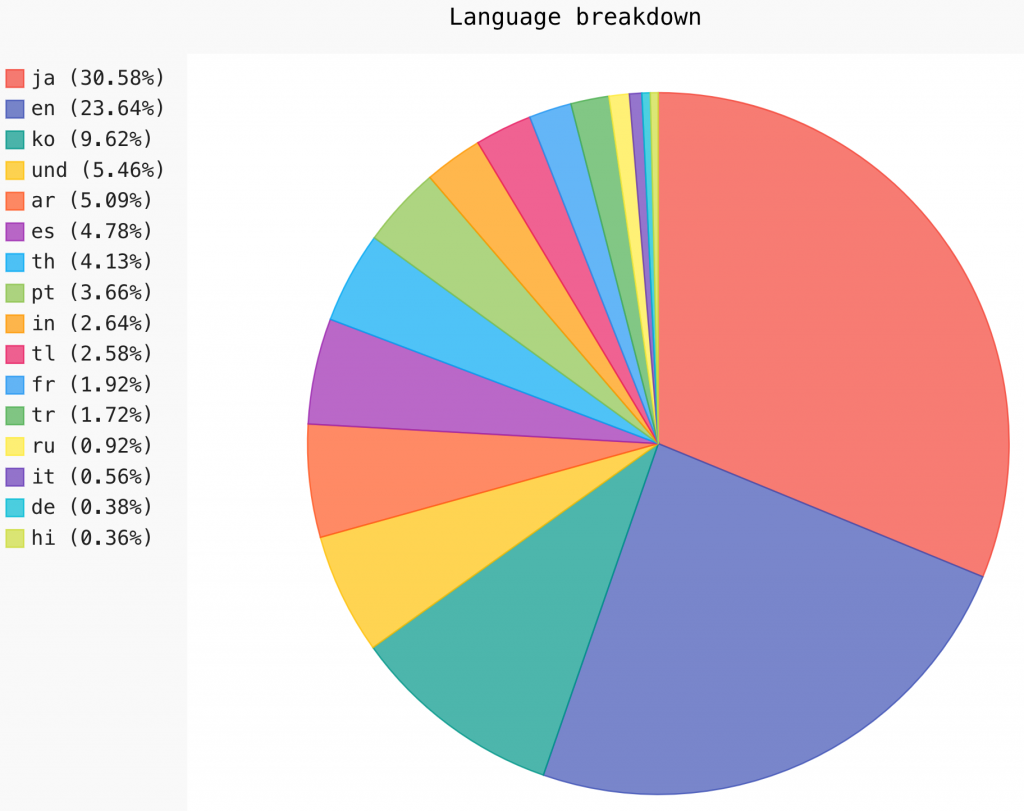 Over the last month, Twitter activity around German election keywords has hovered at between 2 and 5 Tweets per second. Exceptions only occurred during the TV Debate (Sunday September 3rd 2017) and the day of voting (Sunday September 24th 2017). Surprisingly, Tweets volumes were still low on Saturday September 23rd 2017 – the day before votes were cast.

Here’s how things looked on Friday and Saturday: 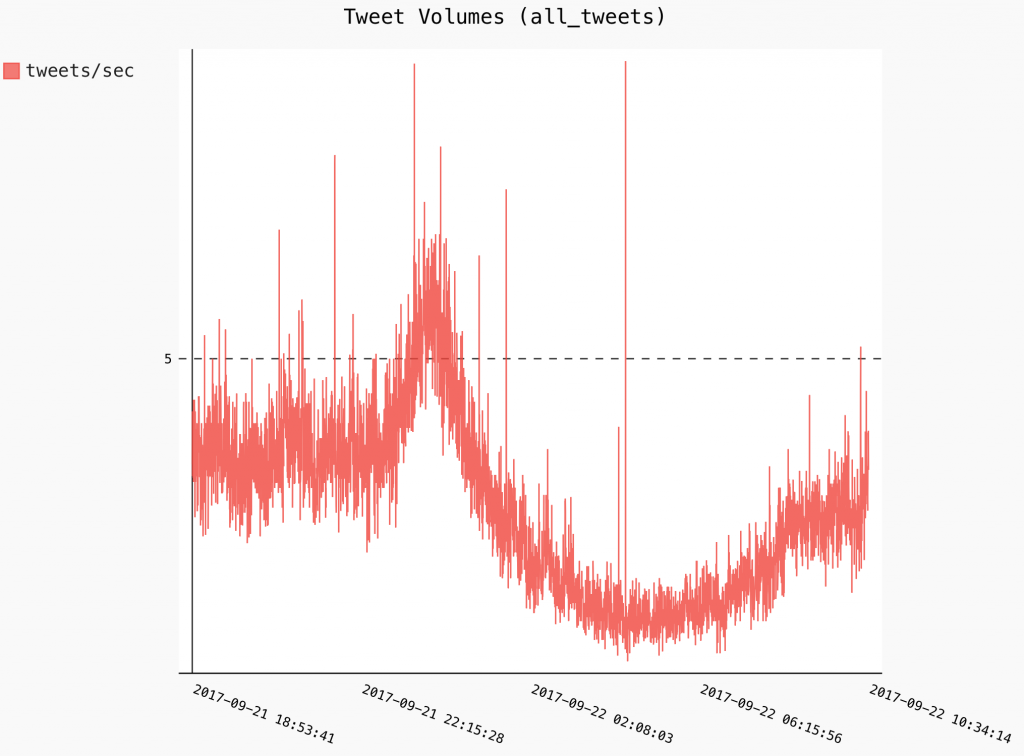 Prior to polls closing on Sunday, Tweet volumes reached a sustained 10 Tweets per second. Once exit polls were announced, volumes exploded. 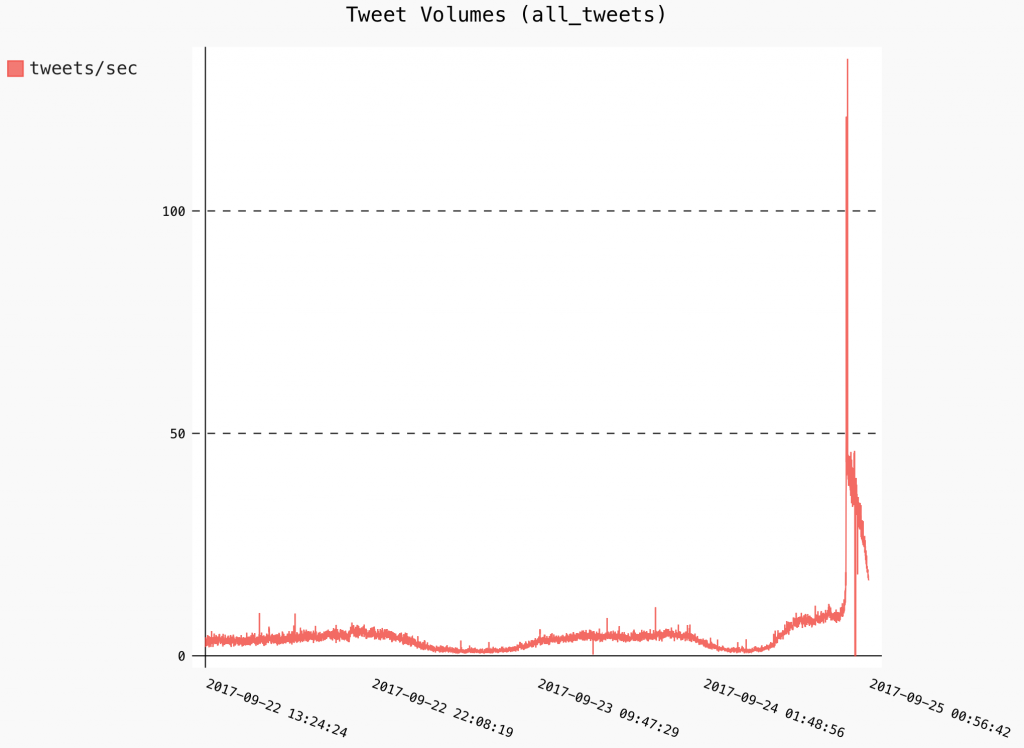 Over the past month, topics related to the AfD party were pushed rather heavily on Twitter. This snapshot, taken on Thursday 21st September, is pretty similar to every one observed during the whole month. 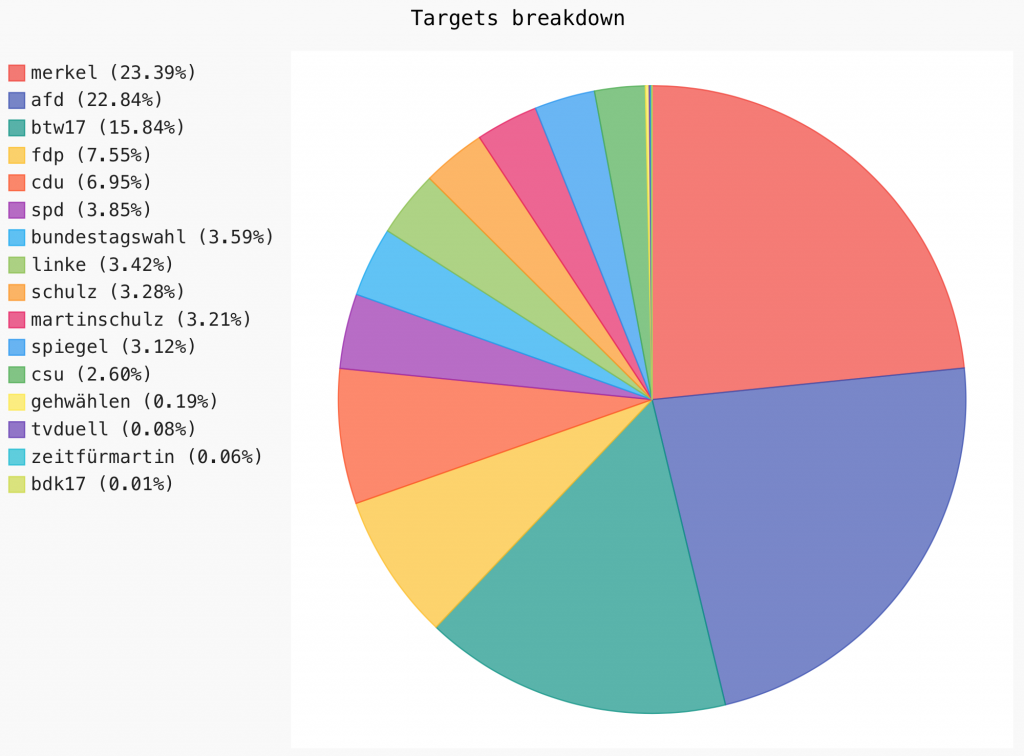 Here’s an example of another trend I observed throughout the entire month regarding #afd hashtag volumes: 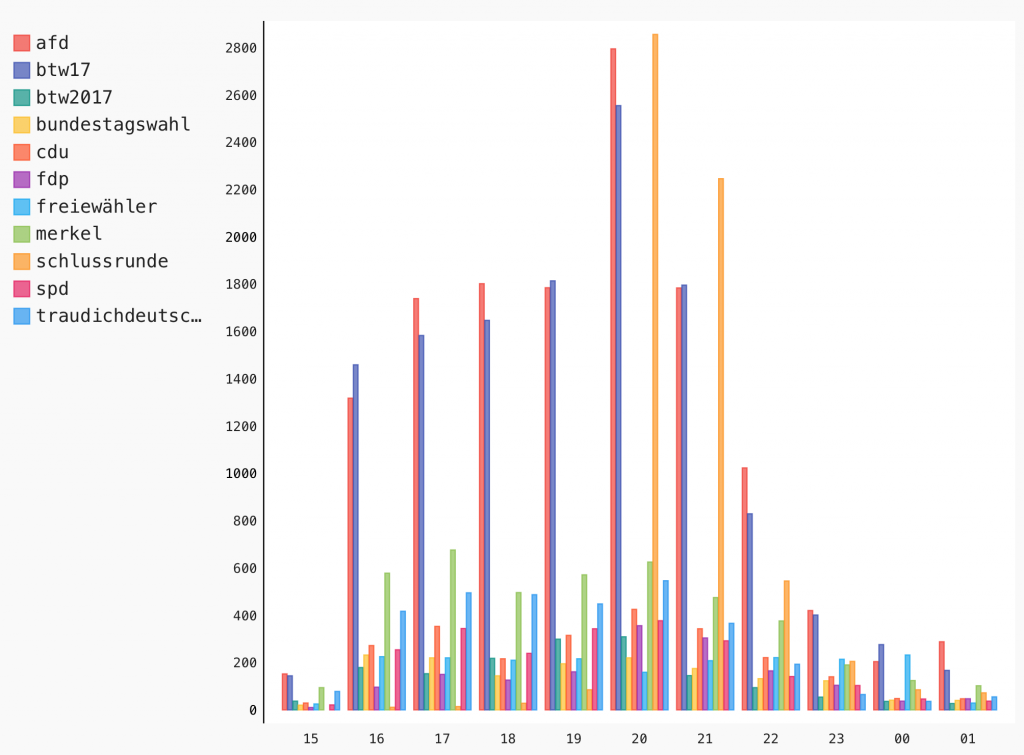 Notice that the Tweet volumes follow an organic pattern, trailing off during night hours. This contrasts what I observed during the French elections earlier this year, where #macronleaks hashtags were pushed by bots, and maintained a constant volume regardless of the time of day. Despite the high volume of AfD-related Twitter content being posted, AfD didn’t show up in Twitter’s own German trends at any point.

The terms “migrant”, “refugee”, “islam” were mentioned a fair bit in Tweets. Here’s what happened over the weekend. 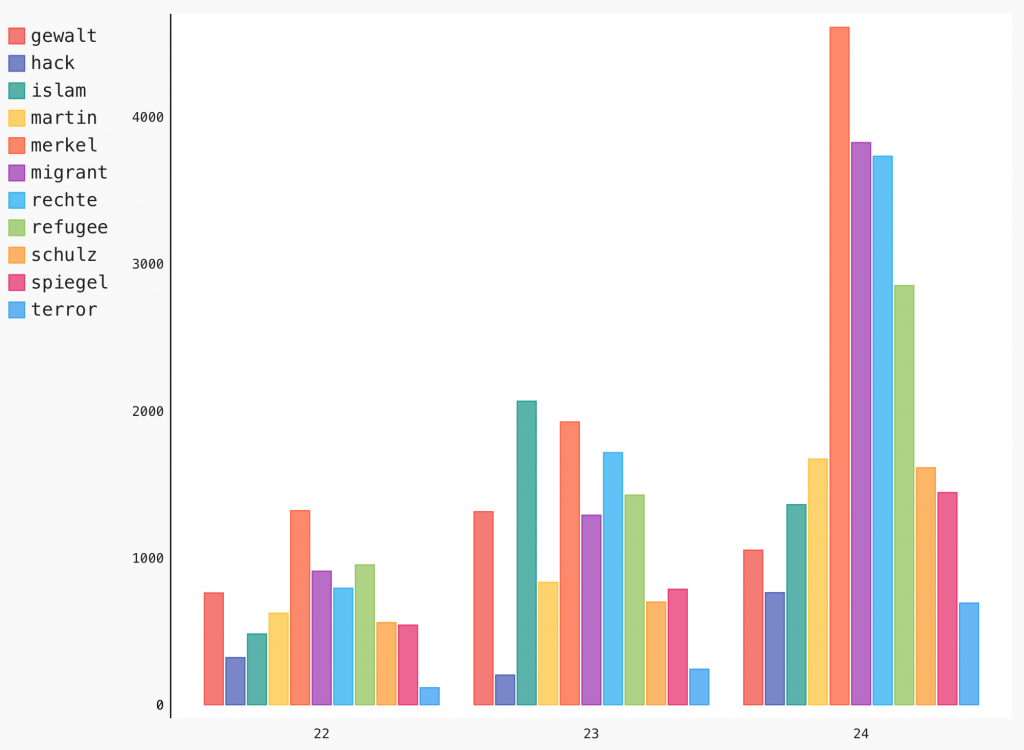 Ben Nimmo of @DFRLab noticed that a hashtag named #wahlbetrug (election fraud) was being amplified by commercial Twitter bots on Saturday. This story was also picked up by the German publication Bild. My scripts also saw the hashtag briefly enter the top 10 during that day. 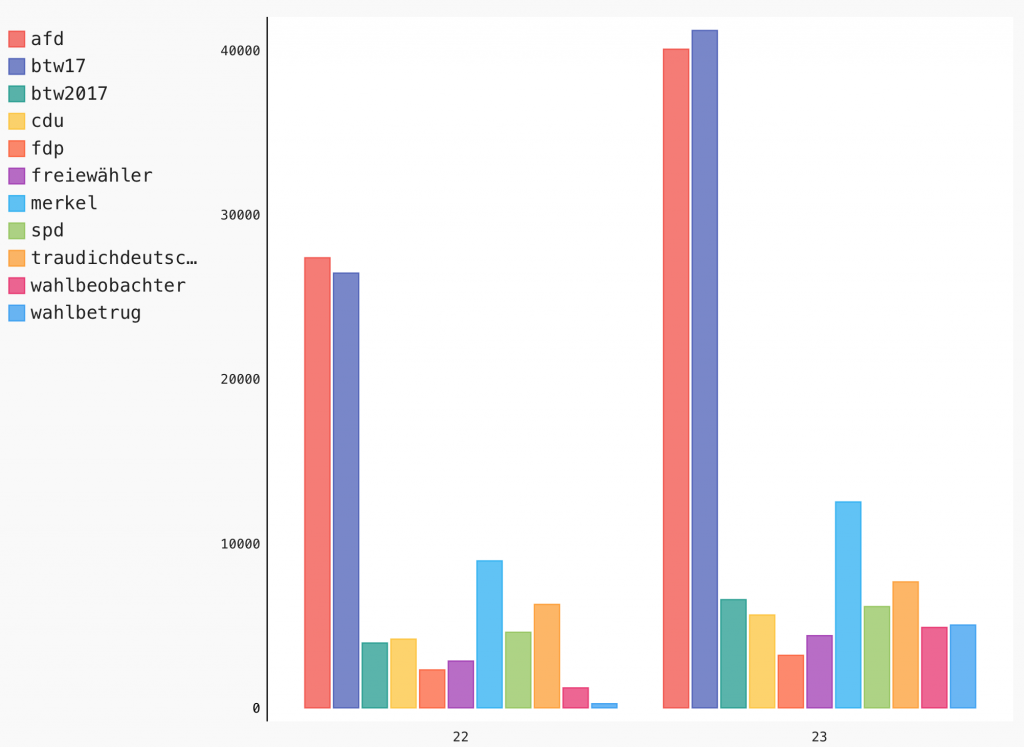 Here’s a Tweet timeline of this hashtag, since it’s appearance. 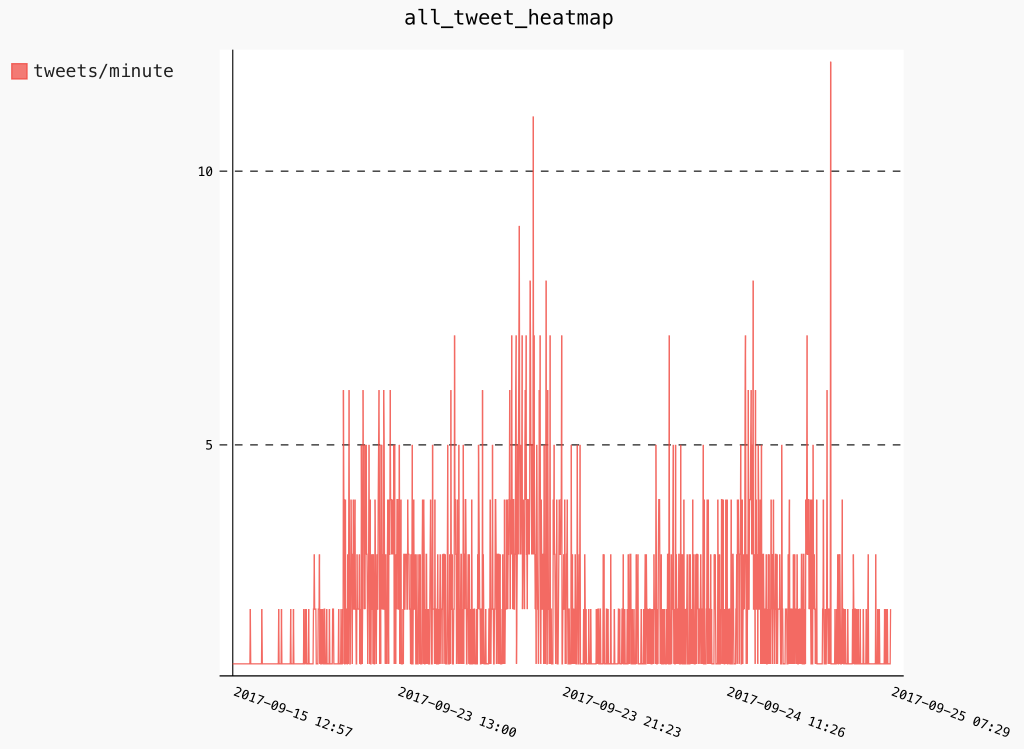 Looking at a timeline of Tweets using this hashtag shows the presence of certain more active accounts pushing this message.

Shortly after exit polls were published, the hashtag #fckafd surfaced. 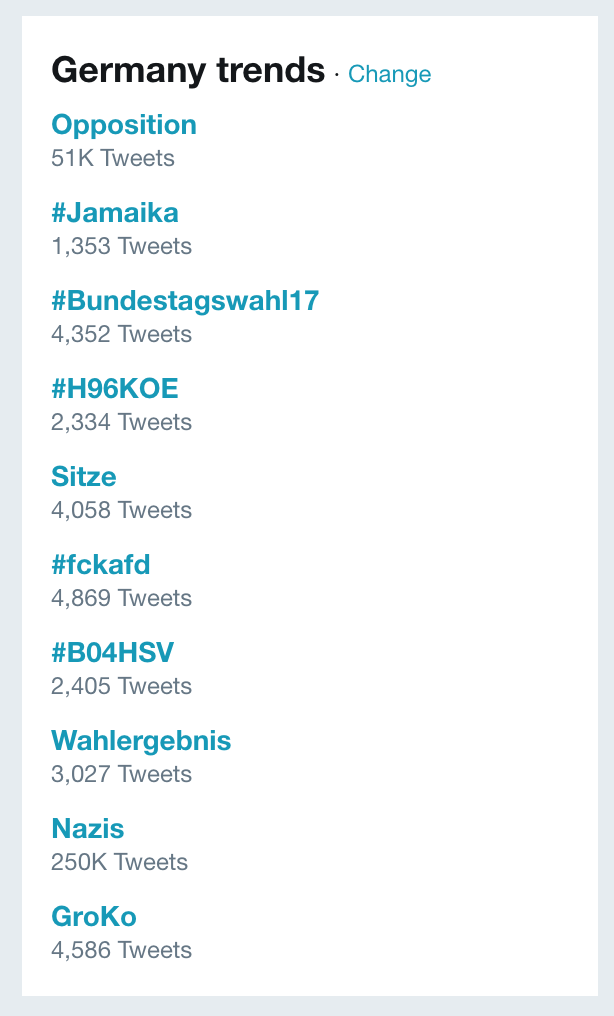 The timeline of this particular hashtag is distinctly different. 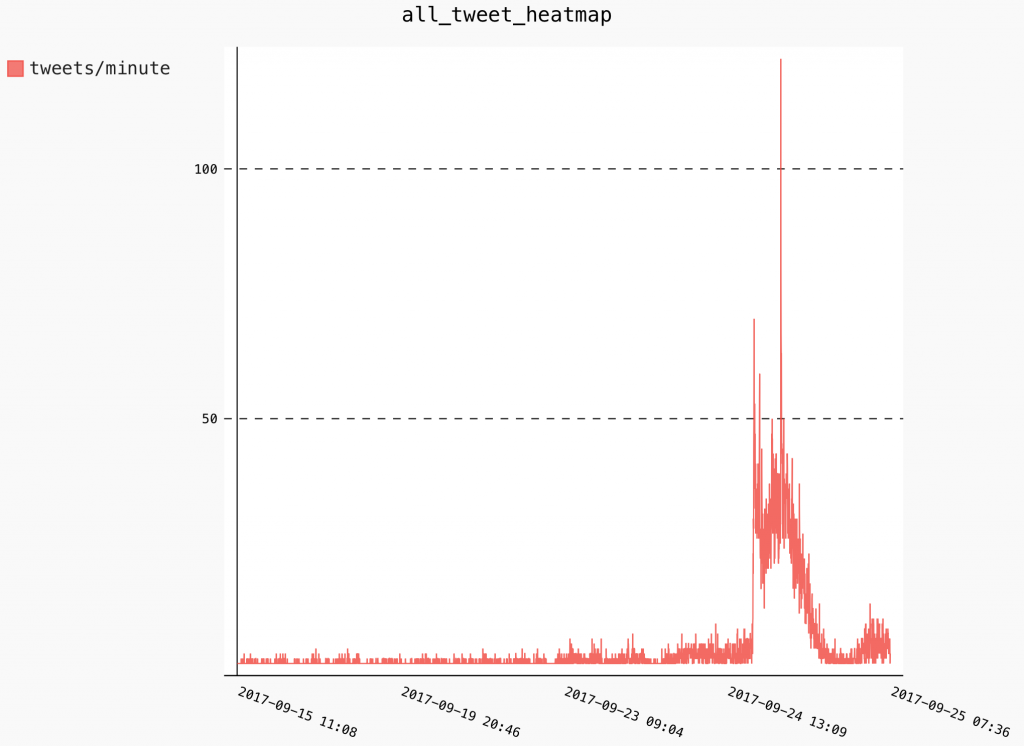 However a number of highly active amplifiers were involved in both cases. 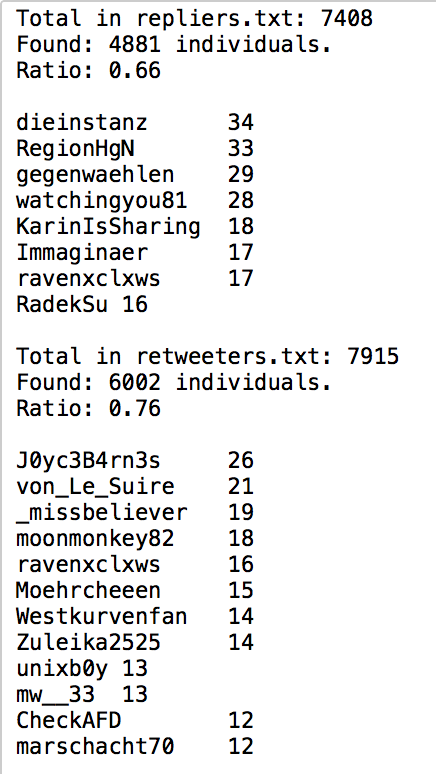 This data illustrates how tricky it is to automate the discovery of artificially amplified Tweets. While the #wahlbetrug hashtag was indeed amplified by paid commercial botnets, it didn’t make a splash, and Twitter users would have most likely have needed to go searching for pro-AfD Tweets to find it.

A few Twitter users posted very actively during the campaign. Over the weekend, @Teletubbies007, @Jensjehagen, and @nanniag were very active. 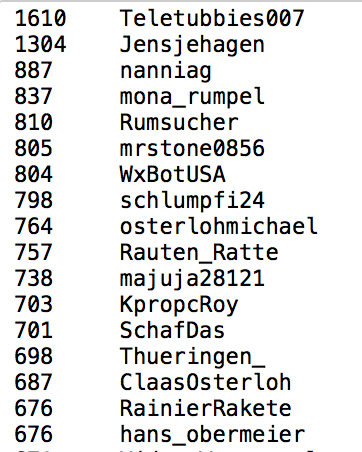 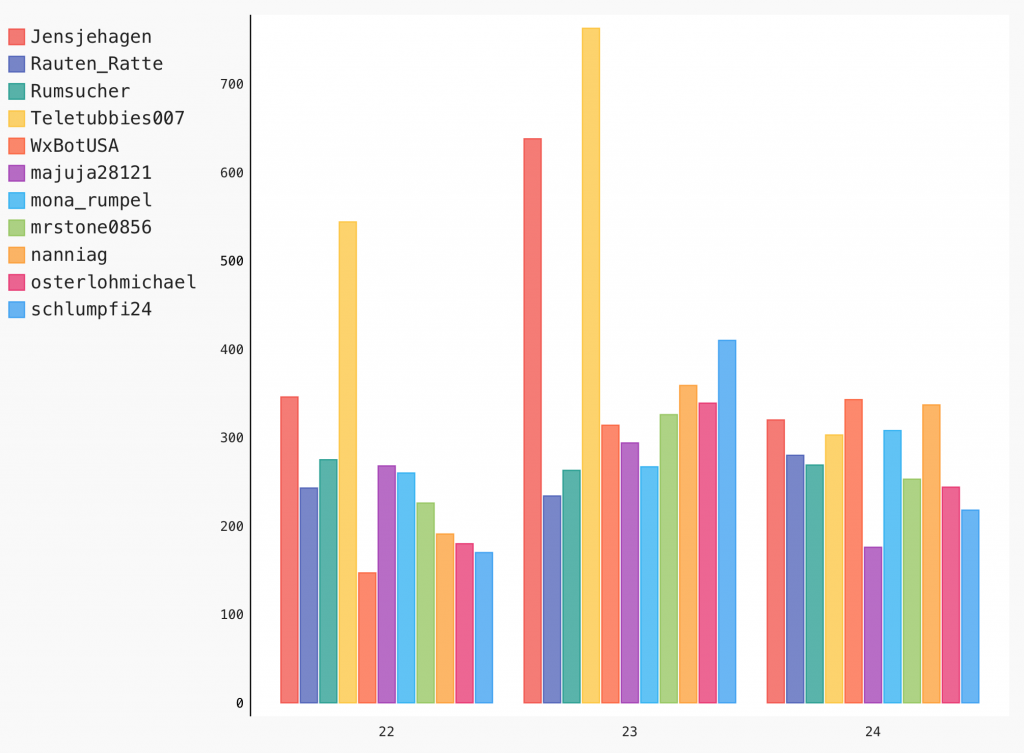 Jensjehagen published the most retweets over the weekend. 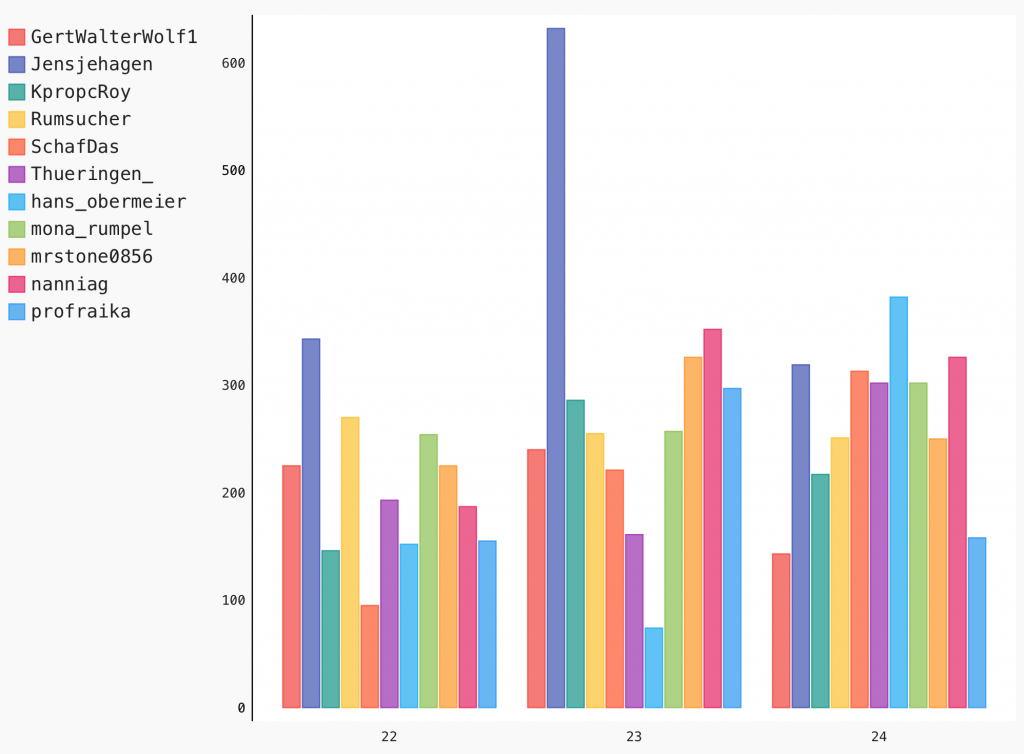 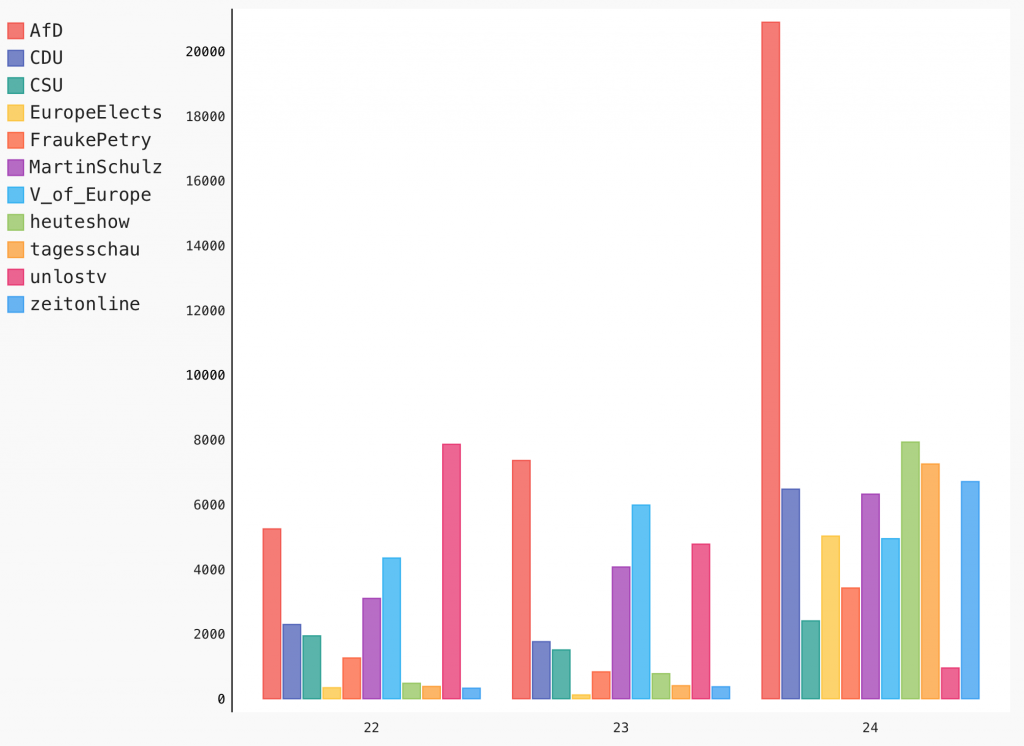 Tools for automating Twitter activity (such as IFTTT) appeared in the top 10 of sources captured during the weekend. 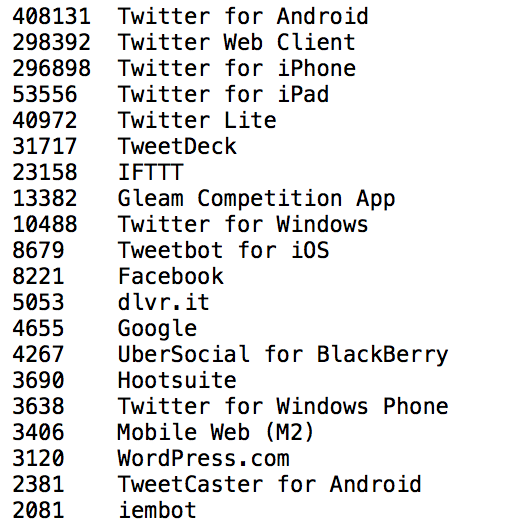 Tweets published by highly active accounts made up about 3.5% of all traffic during the weekend. I had no accurate way of measuring the number of Tweets originating from commercial bot nets, and hence can’t give an estimation as to how much traffic those were responsible for.

My scripts were also configured to look for specific patterns in Tweets and metadata associated with users’ accounts in order to calculate how much activity originated from “alt-right” groups pushing right-wing agenda. Rough calculations from this data suggest that as much as 15% of all Twitter traffic associated with the German election fit this pattern.

Of the roughly 1.2 million Tweets processed between Friday afternoon and Sunday night, about 170,000 Tweets were matched by that bit of logic. These Tweets originated from about 3,300 accounts. This traffic was enough to generate the results seen in this article, but only to those looking at Twitter streams with automated tools, such as the ones I’m using.

Of note were a few videos and URLs that received a fair amount of retweets. The most obvious of these was a video posted by V_of_Europe showing an immigrant removing election campaign posters. 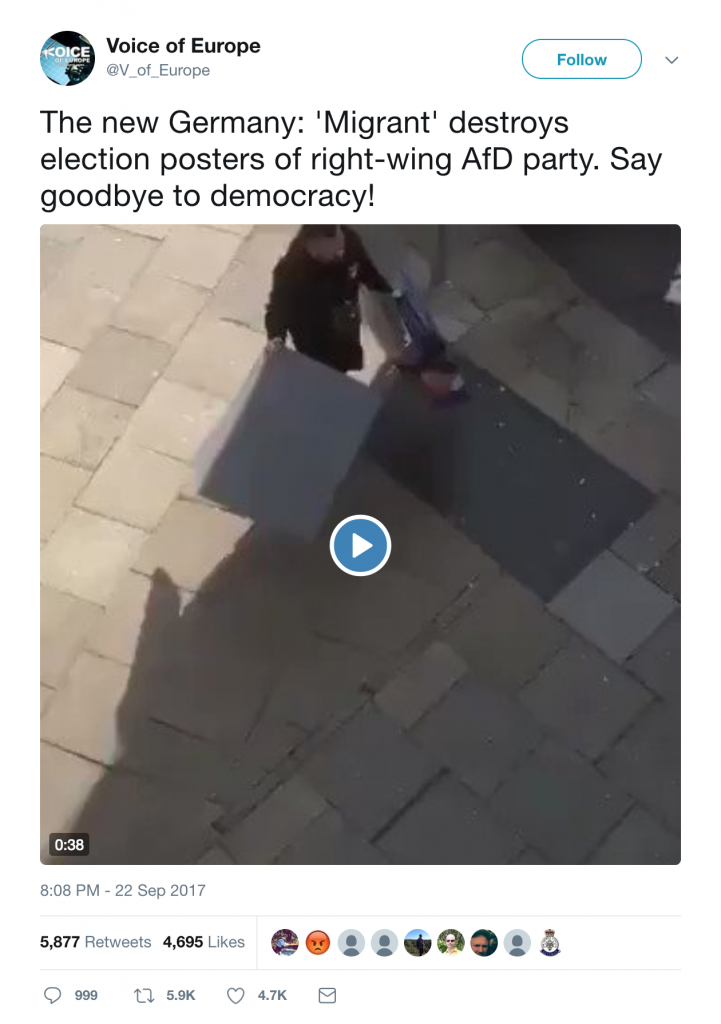 This was the second most retweeted Tweet I could find from the weekend (pertaining to the election itself). This Tweet was also pushed in other languages. 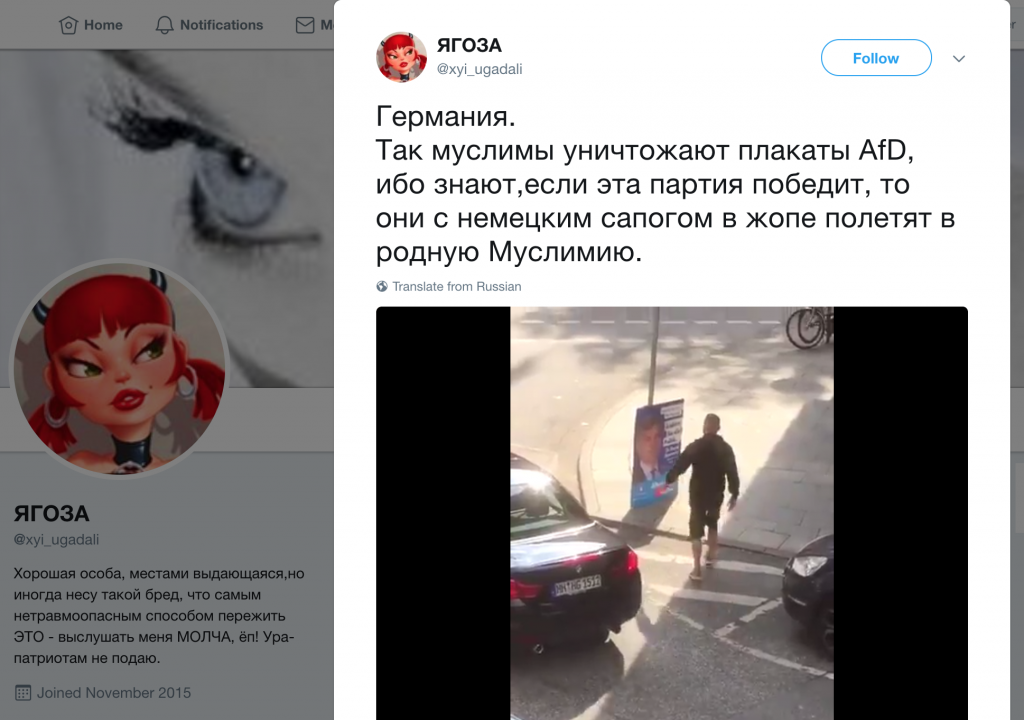 Another notable Tweet that showed up earlier in the weekend was a story about Merkel being booed at her final campaign rally in Munich. It didn’t get a whole lot of traction, though. 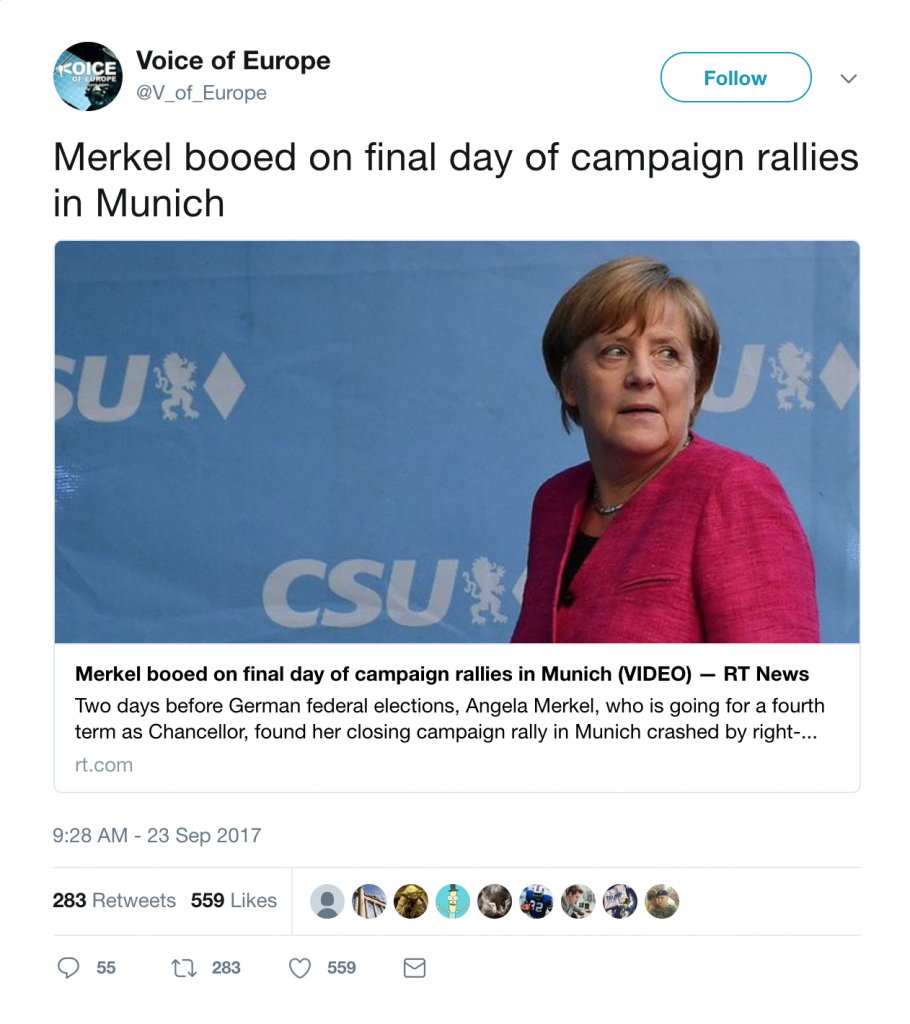 Plenty of links were shared to non-authoritative news sources. Here’s just one example… 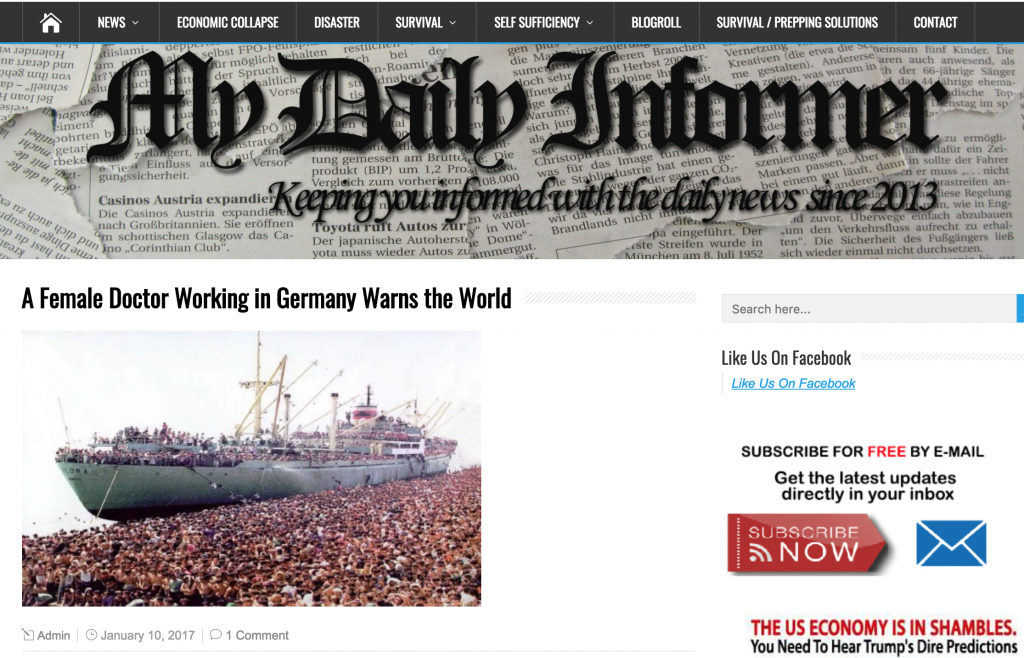 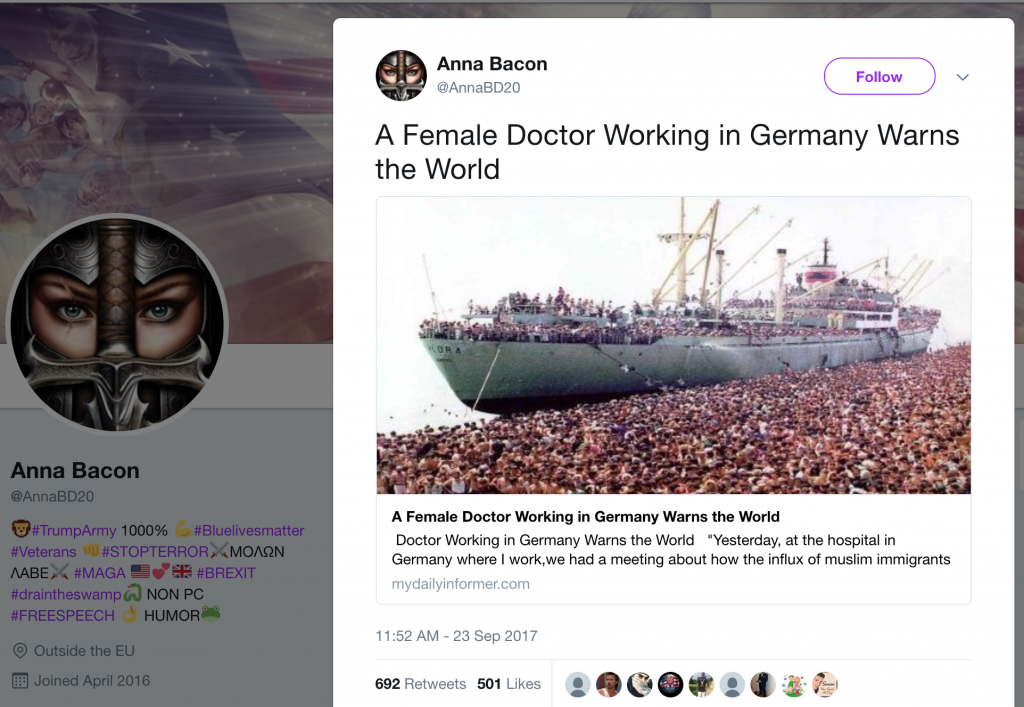 And on the same note, during the weekend, I saw plenty of non-German accounts Tweeting in German, and pushing links to questionable news sources. 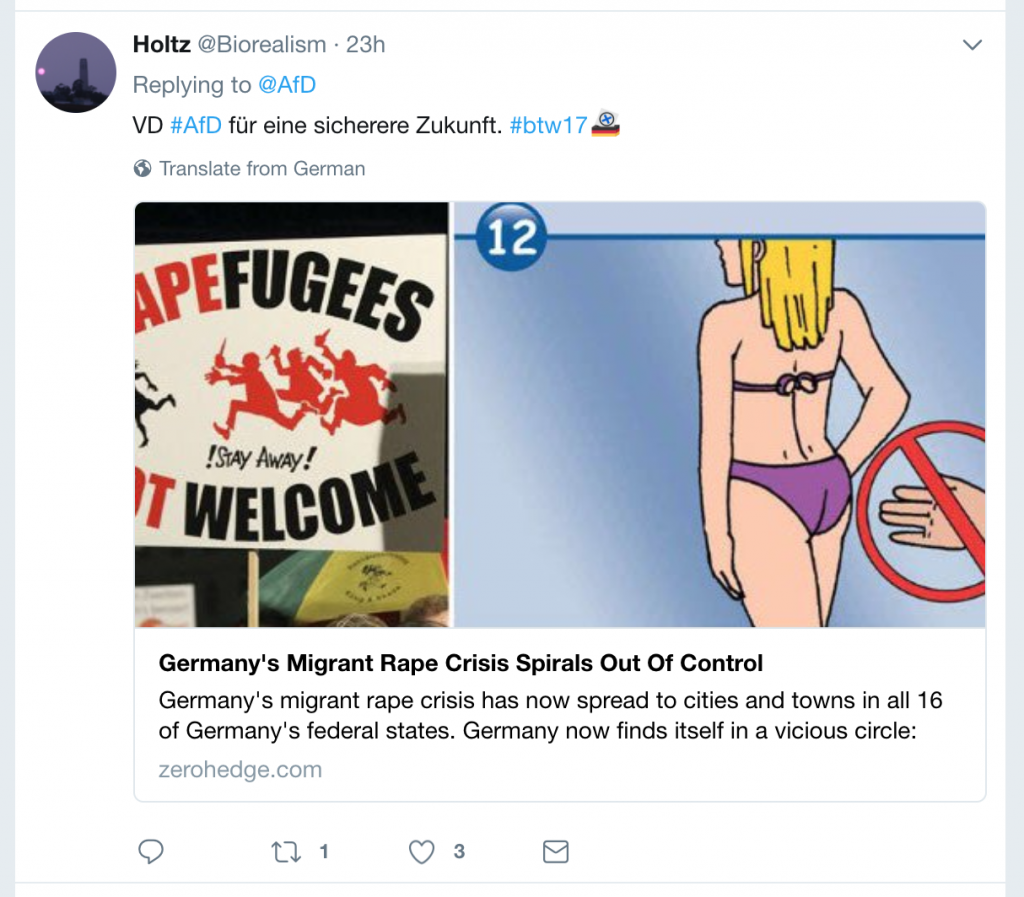 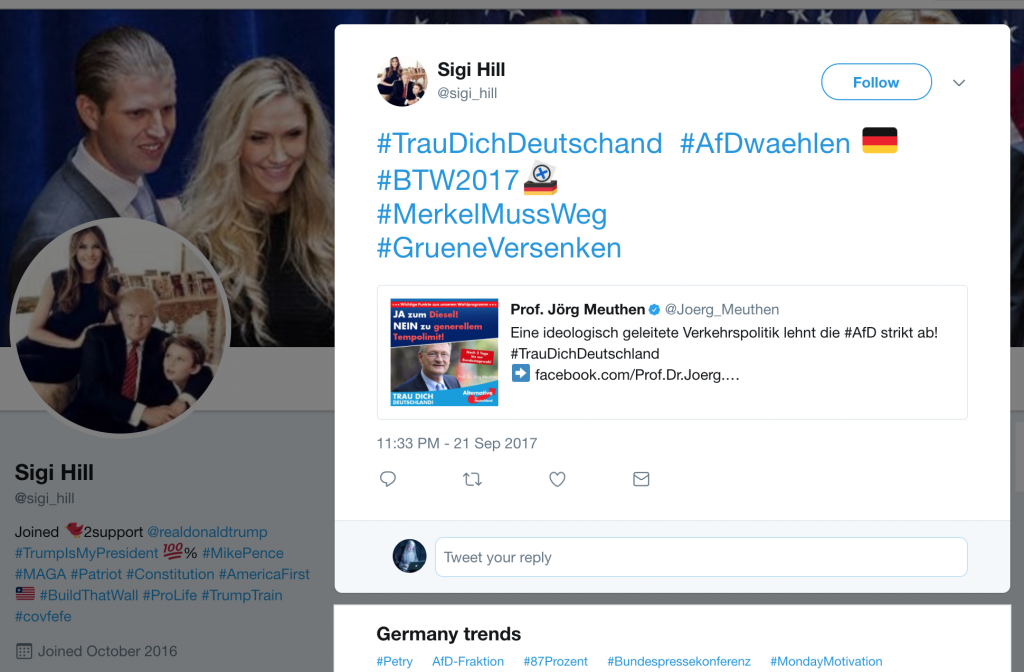 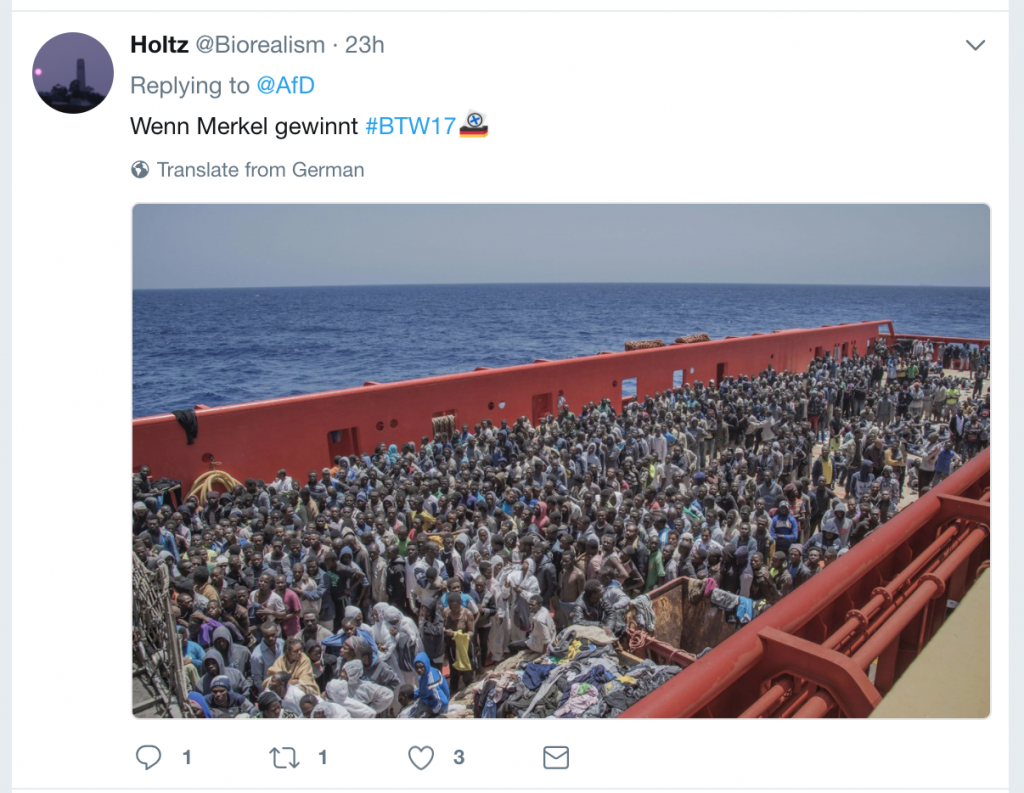 I also captured plenty of pro-Trump accounts posting in English. 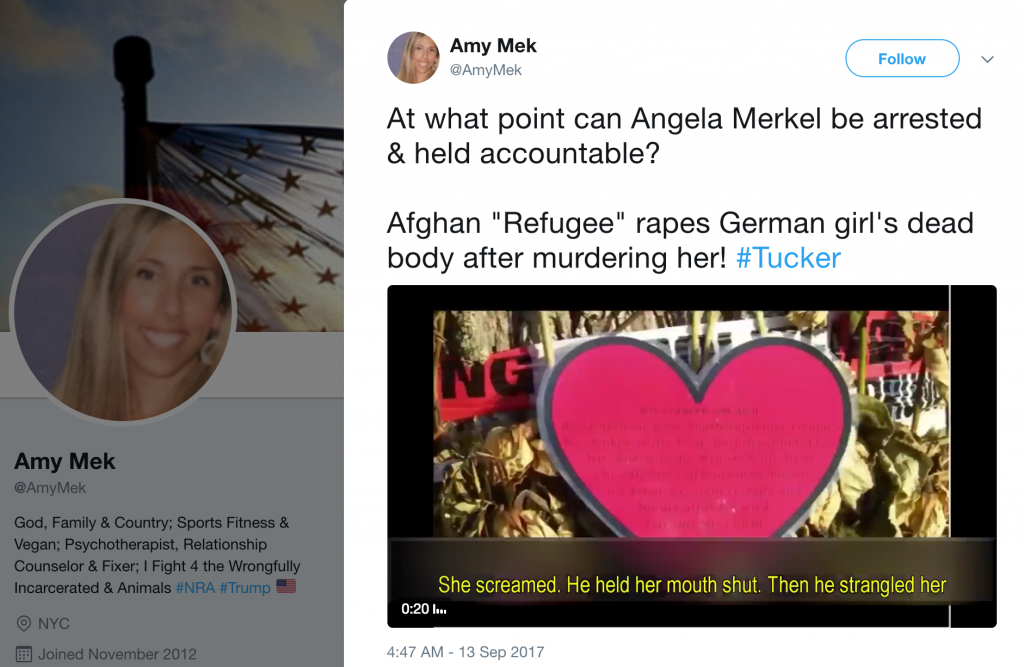 Another interesting story that failed to gain traction was one about an election results leak prior to the end of voting. 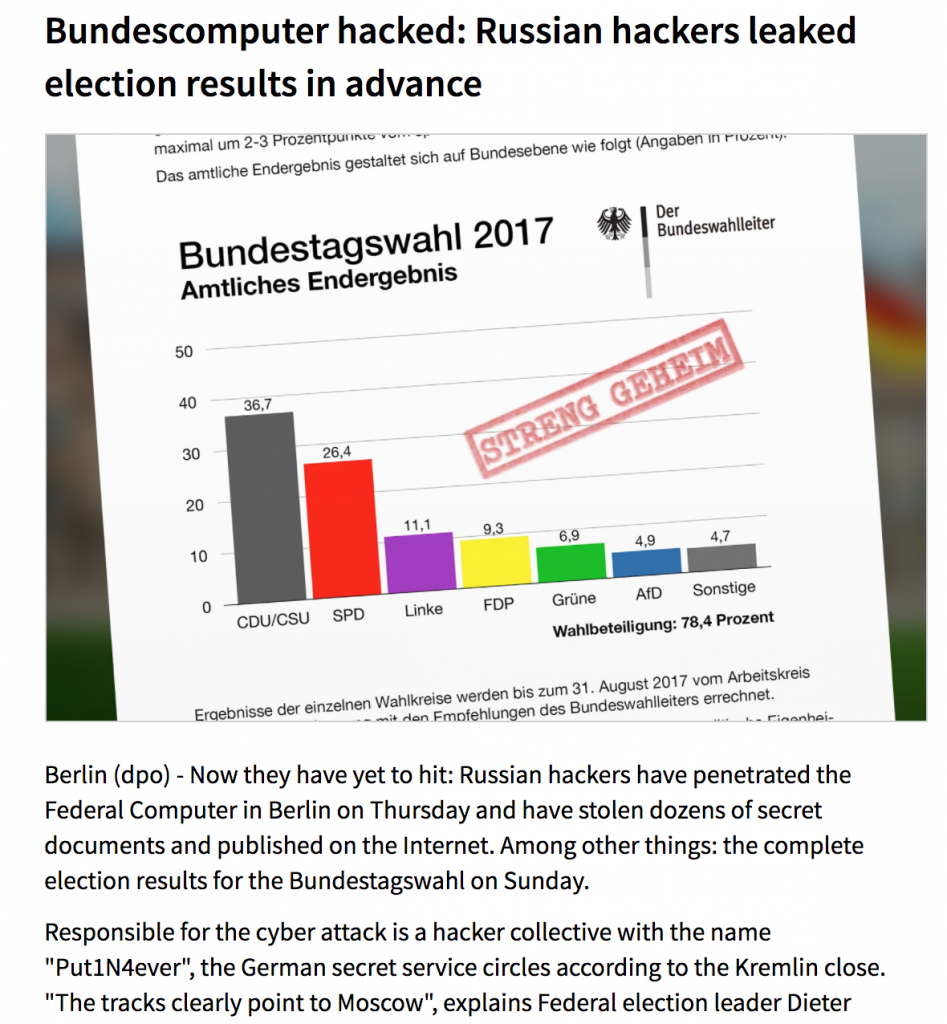 Across the duration of my analysis, 200,000 individual URLs were shared. Around 418,000 Tweets contained those URLs. Of those Tweets, only some 500 linked to questionable political content, which were shared in about 4,000 Tweets. Of the 400,000 unique Twitter users observed participating in this discussion, about 3,000 users were responsible for sharing “fake news” links. By and large, the accounts sharing these links didn’t look like bots.

Merkel was the most seen word in Tweets that shared links to political agenda articles.

Overall, German language Tweets made up roughly 60% of all Tweets during the run-up to the election.

At the time of writing, the most retweeted Tweet I can find pertaining to the election is this one, which has already received over 10,000 retweets.

Also, it’s nice to see that Russians themselves have a sense of humor when it comes to all the allegations of election interference.

Given the lack of German participation on Twitter, it seems to me that the heavy right-wing messaging push that’s been going on during the German election cycle has been more about recruiting new members into the alt-right than it’s been about election interference.