What is good network analysis?

Detection of and protection from advanced cyber-attacks can’t rely on perimeter defense or endpoint agents alone.

It’s important to analyse other data sources to corroborate the indicators found at endpoints and create further opportunities to detect stealthier attacks. Foremost among these other sources are log and network analyses.To understand why network analysis is so important, first you have to understand how an attacker will try to infiltrate your organisation, why they need to use the target network, and what methods attackers will deploy. We can show this process using the cyber kill chain.Unless they can gain physical access, an attacker’s only way in is through the target network.

Most advanced attacks share common phases of the cyber kill chain, such as the initial compromise or lateral movement to reach their objective.

Attacker activities in these phases creates network traffic, leaving a footprint that can be used in hunt cases and network analysis. While network analysis itself provides unique opportunities to find threats due to its unique data types, when combined with endpoint and log analyses we can gain a full view of attacker movement along the cyber kill chain. 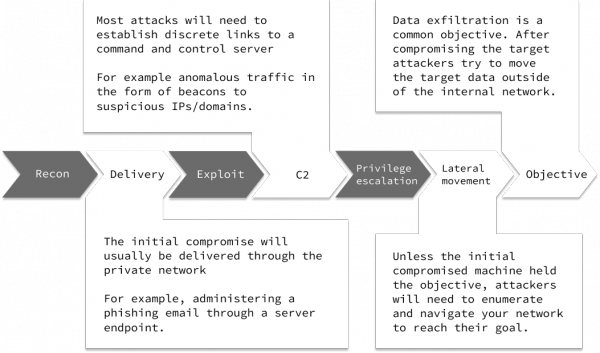 Each phase has a specific purpose and specific activities that can be individually identified. As such, defenses have been developed to monitor for malicious network use. But, as in all elements of cyber-attack, once a TTP is identified or becomes ineffective, attackers are forced to innovate.

Advanced persistent threats have become skilled at innovating TTPs that avoid detection and allow attackers to maintain persistence on a target’s network for multiple years. From a networking perspective, attackers have a number of techniques they can employ, for example:

As attackers continue to challenge through iteration and improvement, defenders must also continually hunt for threats. Threat hunters knowing the TTPs of attackers discover new attack paths that can then be remediated. Knowing the possible network movements and bleeding edge attacker TTPs creates the experience and intuition for effective threat hunting.

Effective threat hunting is a strong defense against the evolving threat that persistent and well-resourced adversaries create. Continued effectiveness depends on knowing the different network indicators and varying attacker TTPs and building up the experience and intuition that successful threat hunters need.