What you actually need to do if you’re hacked

Employees, even well-informed security conscious individuals, are often unprepared to deal with security issues. It can even be difficult to know whether they’re compromised, or just experiencing some kind of IT problem. And according to Janne Kauhanen, an expert with F-Secure’s Cyber Security Services, it’s pretty common for people to panic and stress out when they think they’ve been hacked. They can even make problems worse by not dealing with the situation correctly.

So before people freak out and throw their computer out the window or something, they should consider following this plan. Calmly taking these steps to begin limiting the damage and figure out what’s happened will save companies time, money, and headaches.

Basically, turning off the power will wipe out any information stored in the devices random access memory (RAM), which can be useful to investigators. “Turning off the computer is like destroying evidence – evidence that can help uncover who the attackers are and what they’ve done,” says Janne. “So really, doing this helps whoever has hacked your device by making investigative work more difficult.”

Ultimately, you’re helping the attackers get away, requiring your employer to invest more time and money into conducting any post-breach forensic work. So don’t turn off the power to the device. You should even plug-in devices to make sure the battery doesn’t die before investigators have a chance to look at it.

And obviously, don’t continue to use any kind of removable storage device (including phones and tablets) that’s been in contact with the affected device (physically or via a wireless network).

“Dates and times of events are particularly important,” says Janne. “Devices contain lots of potential evidence, but keeping track of what happened when will help narrow the scope so everyone can work faster.”

We’ve prepared an illustrated guide to take you through these steps, and it includes a space to write in contact details for your cyber security point of contact. 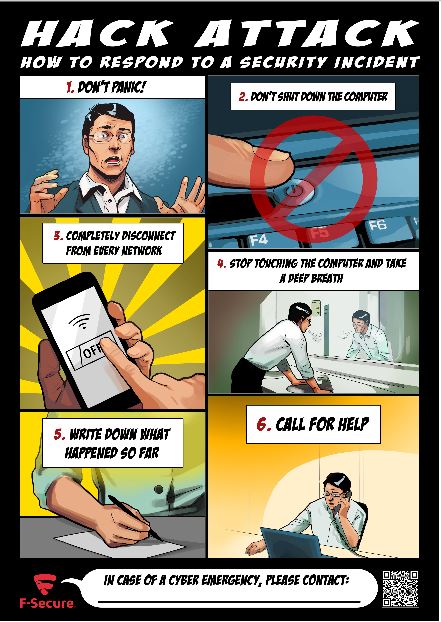